photo by Herzel Yosef via ynetnews 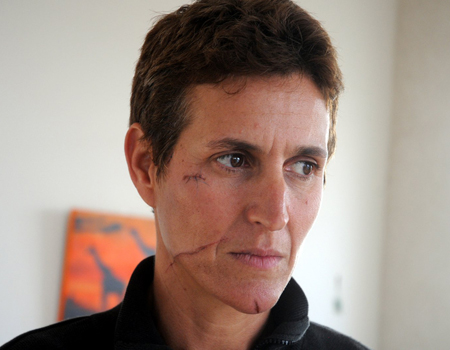 she was awoken by heavy footsteps in the hall. She knew that her husband, an IDF officer, was not due at home.

"Suddenly I saw a terrorist in a kefiyyeh [head scarf] standing opposite me," she told Maariv. "I decided that if I didn't fight, he would murder me and my four children, there would be a massacre like in Itamar, where the Fogels and three of their children were murdered in their home."

The terrorist turned on the light and said something in Arabic, she recalled. He had a knife in one hand and a metal pipe in the other. Suddenly he lunged at Yael, stabbing her in the face and shoulder.

What the terrorist did not know is that Yael is an athlete trained in Krav Maga, Israeli military hand-to-hand combat. She used her skills to drive him back and into the bathroom, and locked him in. At the same time, she pushed her young children to safety.

Once the terrorist was locked away, she called for help. IDF forces arrived only to see the terrorist escaping through a bathroom window. They gave chase and attempted to arrest him, but were forced to open fire when he refused to drop his weapons. The terrorist was killed.

"The terrorist fell into the wrong woman's hands, from his point of view," Yael's father said. "Even when she was a young girl, she would hug me like a vice... After she learned Krav Maga she was always able to take down thugs."

IDF soldiers stationed along the Gaza border claimed on Tuesday that the recent ceasefire with Hamas has tied their hands when it comes to responding to provocations along the security fence - possibly putting residents of communities near Gaza in danger.

"There are hundreds and possibly thousands of people roaming near the fence, including uniformed Hamas men," one soldier explained. "They crossed the fence several times and went into our forces' positions... The forces cannot push them away from the fence because they may not even fire in the air." However, IDF forces shot and killed a terrorist who crossed the border on Sunday.