King Louis XIV of France asked Blaise Pascal, the great French philosopher, to give him proof of the supernatural. Pascal answered......

Watch a 3-minute video: "Dreams of Future and Past" with Rabbi Ken Spiro

In the final analysis, Jewish history makes no rational sense. 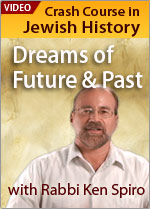 On January 16, 1996, then President of Israel, Ezer Weizmann, gave a speech to both Houses of Parliament of Germany. He delivered this speech in Hebrew to the Germans 50 years after the Holocaust and in it he beautifully summed up what Jewish history is. He said:

"It was fate that delivered me and my contemporaries into this great era when the Jews returned to re-establish their homeland... I am no longer a wandering Jew who migrates from country to country, from exile to exile. But all Jews in every generation must regard themselves as if they had been there in previous generations, places and events. Therefore, I am still a wandering Jew, but not along the far flung paths of the world. Now I migrate through the expanses of time from generation to generation down the paths of memory...

"I was a slave in Egypt. I received the Torah on Mount Sinai. Together with Joshua and Elijah, I crossed the Jordan River. I entered Jerusalem with David and was exiled with Zedekiah. And I did not forget it by the rivers of Babylon. When the Lord returned the captives of Zion I dreamed among the builders of its ramparts. I fought the Romans and was banished from Spain. I was bound to the stake in Mainz. I studied Torah in Yemen and lost my family in Kishinev. I was incinerated in Treblinka, rebelled in Warsaw and emigrated to the Land of Israel, the country from where I have been exiled and where I have been born and from which I come and to which I return.

"I am a wandering Jew who follows in the footsteps of my forebearers. And just as I escort them there, and now and then so do my forebearers accompany me and stand with me here today. I am a wandering Jew with the cloak of memory around my shoulders and the staff of hope in my hand. I stand at the great crossroads in time, at the end of the 20th century. I know whence I come and, with hope and apprehension, I attempt to find out where I am heading.

"We are all people of memory and prayer. We are people of words and hope. We have neither established empires nor built castles and palaces. We have only placed words on top of each other. We have fashioned ideas. We have built memorials. We have dreamed towers of yearning, of Jerusalem rebuilt, of Jerusalem united, of a peace that will swiftly and speedily establish us in our days. Amen."

When we look back at the history of the Jewish people which we have just examined at lightning speed in the pages of this course, we have to keep one key thing in mind that the very survival of the Jewish people through recorded time is nothing short of miraculous. The very fact that Jews exist as a nation today stands in testimony to the existence of God who acts in history. By any historical measure, the Jewish people should have disappeared long ago.

The person who summed this up best was David Ben Gurion, the first Prime Minister of the State of Israel. He said: "A Jew who does not believe in miracles is not a realist."

Why did he say that? Because miracles are the only possible explanation for the existence of the Jewish people.

Over 300 years ago, King Louis XIV of France asked Blaise Pascal, the great French philosopher, to give him proof of the supernatural. Pascal answered: "Why, the Jews, your Majesty - the Jews."

An astonishing answer. The best proof of the supernatural that Pascal could think of was: "the Jews."

We don't have to speculate what Pascal meant when he gave this answer, because he took the trouble to spell it out in his 1670 work, Pensees. Pascal said the fact that the Jewish people survived until then was nothing short of a supernatural phenomenon. There simply was no logical explanation for it.

As we have seen from this series, Jewish history simply doesn't comply with the rest of history; it does not make sense. Many scholars, historians and writers have noticed this and remarked about it.

Mark Twain (a.k.a. Samuel Clemens), the great American writer, who was an agnostic and a self-acknowledged skeptic, penned this in 1899 in Harper's Magazine:

The Egyptian, the Babylonian, and the Persian rose, filled the planet with sound and splendor, then faded to dream-stuff and passed away. The Greek and Roman followed, made a vast noise and they are gone. Other peoples have sprung up, and held their torch high for a time, but it burned out and they sit in twilight now or have vanished. The Jew saw them all, beat them all, and is now what he always was, exhibiting no decadence, no infirmities of age, no weakening of his parts, no slowing of his energies, no dulling of his alert and aggressive mind. All things are mortal, but the Jew. All other forces pass, but he remains. What is the secret of his immortality?

Leo Nikolaivitch Tolstoy, unlike Twain, was not an agnostic. He was a very religious, Russian Orthodox Christian. He is also a very famous Russian author from the last century, perhaps best known for his War and Peace. He wrote this in 1908:

The Jew is the emblem of eternity. He whom neither slaughter nor torture of thousands of years could destroy, he whom neither fire, nor sword, nor Inquisition was able to wipe off the face of the earth. He who was the first to produce the Oracles of God. He who has been for so long the guardian of prophecy and has transmitted it to the rest of the world. Such a nation cannot be destroyed. The Jew is as everlasting as Eternity itself.

In 1935 Nikolai Berdyaev, one of the most famous Russian philosophers of the 20th century wrote:

The Jews have played an all-important role in history... Their destiny is too imbued with the "metaphysical" to be explained either in material or positive historical terms... Their survival is a mysterious and wonderful phenomenon demonstrating that the life of this people is governed by special predetermination, transcending the process of adaptation... The survival of the Jews, their resistance to destruction, their endurance under absolute peculiar conditions and the fateful role played by them in history - all point to the particular and mysterious foundations of their destiny.

There is another reason why the Jewish people survived as a nation through all this time and through all the persecutions that we have barely touched on in this series - they have clung to their religion. The Zionist Ahad Ha'Am is famous for saying: "More than Israel has kept Shabbat, Shabbat has kept Israel."

One of the most important lessons of Jewish history is that the more the Jews have been connected to Judaism - in lifestyle, in education, etc. - the more likely that their children and grandchildren would have remained Jewish, instead of assimilating into oblivion.

Today there are approximately 13 million Jews in the world, where there should be 500 million. The reasons why: 1) persecution, and 2) assimilation.

The greatest strength of the Jewish people is also their greatest weakness.

Jews are a "stiff-necked" people. They have stubbornly clung to their beliefs and as a result outlasted all of the ancient empires of history while changing the way the entire world looks at morality and the concept of God. Jewish ideas - of one God, of a loving God, of a universal vision for humanity - have been at odds with the philosophies of all these empires, and to hold up that vision has required an unbelievable strength of character.

And yet, what is the greatest weakness of the Jewish people? Their stubborn individuality makes them unbendable.1 Every Jew thinks he or she is right. The hardest job on earth must be to unify and lead the Jewish people.

Of course, this stubbornness, when focused in the right direction (through Jewish education and Jewish values) has enabled the Jewish people to accomplish great things. When unified, the Jewish people are an unbeatable force in human history. As theZohar states: "The Torah is like oil in a lamp, and Israel is its wick, causing the light of God to shine forth on all creation."2

Jewish history is like a 6,000-piece puzzle. At the beginning you dump the pieces on the table and it makes no sense. But as you assemble piece after piece, a picture emerges. A picture that records the action of God in history. There's no chance or randomness here - everything happens for a reason.

By Jewish reckoning we have assembled almost all of these pieces and have only a few hundred to go.3 History is moving toward a conclusion, its final destination. That final destination was described by Prophet Isaiah in these words:

In the days to come, the mountain of God's house shall stand firm above the mountains and tower above the hills. And all the nations shall stream to it. And the many peoples shall go and say: "Come, let us go up to the Mount of God, to the House of the God of Jacob - that He may instruct us in His ways, that we may walk in His paths. And they shall beat their swords into plowshares and their spears into pruning hooks; nation shall not lift up sword against nation. Neither shall they learn war anymore... At that time the wolf shall dwell with the lamb, the leopard lie down with the kid, the calf and the beast of prey shall feed together with a little child to herd them.4