A slow-moving, moisture-laden storm system will continue to bring a mix of rain, sleet and snow to the eastern Mediterranean into Saturday. Gusty winds will also accompany this blast of nasty weather.

While the worst of the wintry weather should be focused across the mountains of Syria, Lebanon, Jordan and Israel, lower elevations, such as Jerusalem, have already had accumulating snowfall, leading to widespread travel problems.

The threat for rain and snow will continue across the entire region into Saturday as the storm system crawls eastward. By Saturday afternoon, the worst of the storm will be over as it moves eastward.

This cooler-than-normal weather combined with plentiful moisture set the stage for rounds of snow across Jerusalem and the surrounding area. 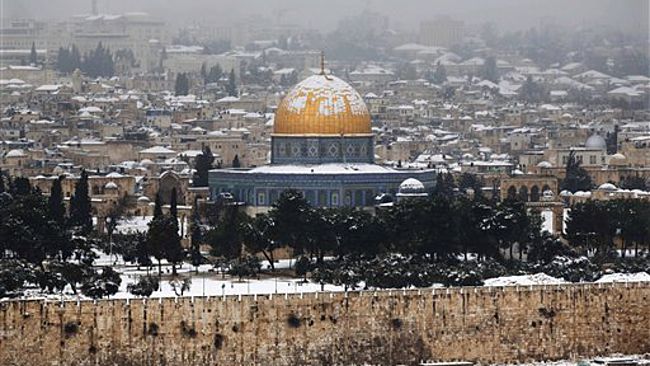 A view of Jerusalem's Old City with the Dome of the Rock Mosque, Thursday, Jan. 10, 2013. (AP Photo/Bernat Armangue)

Snowfall amounts have been varied across the city and surrounding area with as much as 30 centimeters (12 inches), according to The Jerusalem Post.

Many of the roads in and out of the city were closed for an extended period on Friday due to the snowfall.

The cold and snow spread all the way into northern Africa where pictures of snow in Cairo surfaced on Friday. This would potentially be the first snowfall in these areas in decades.

Wind gusts of 40-60 kph have already occurred along the coastal plain including cities such as Gaza and Tel Aviv and gusty winds will continue into the weekend.

In the lower elevations, especially near the Mediterranean coast, temperatures will be warm enough to support rain instead of snow. Total rainfall will exceed 100 mm (4 inches) in many areas before the storm departs. Areas around Tel Aviv, for instance, have reported greater than 150 mm (6 inches) since Wednesday. 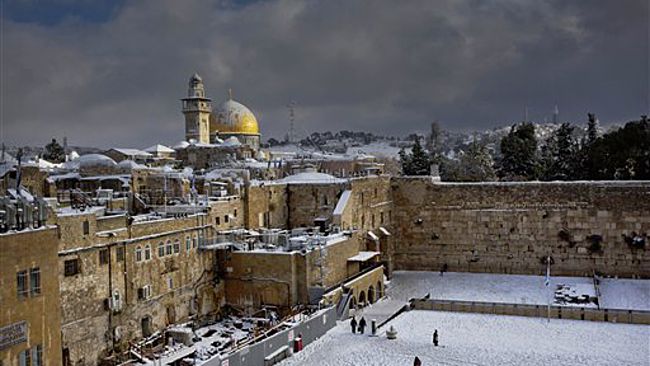 Western Wall and the Dome of the Rock covered in snow in Jerusalem, Friday, Dec. 13, 2013. (AP Photo/Dusan Vranic)

Snowfall in Jerusalem is not all that uncommon and occurs every couple of years on average. Significant accumulating snow, such as what has occurred the past few days is much more rare.

This marks the third year in a row for snowfall in Jerusalem, according to Dr. Amos Porat, Director of the Climate Department at the Israel Meteorological Service, in a statement made to The Jerusalem Post.

Cold weather has dominated much of the region since last week and the chill is expected to persist into next week.