The Hospital that does not exist! 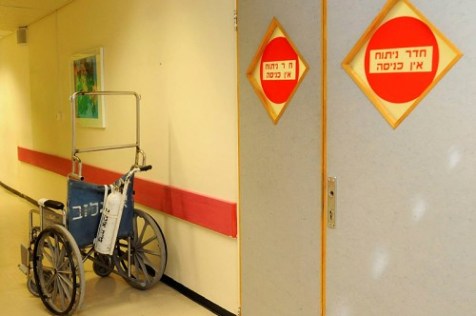 Guess who's behind the door?

A major story is currently being reported in all Israeli newspapers. It is about a father of 13 children whose daughter was just treated by Ichilov Hospital in Tel Aviv. This daughter was born in Israel and has lived here her entire life. While the hospital refused to report the treatment the girl received, it did confirm that she was in fact a patient for a week and that she received, “the same professional care as any other patient in Ichilov hospital”. Why is this a story in all the newspapers? In truth, it’s not a story about the girl, it’s much more about her father… but I’m not done yet…

This same man knows Ichilov Hospital very well. Less than a year ago, in November 2013, he checked his granddaughter into that same hospital. As a matter of fact, he simply loves Israeli hospitals and the terrific care his family receives! In June 2013 his mother-in-law spent time in Hadassah Hospital in Jerusalem and was treated with that same “professional care” that they are so proud of.

So who is this man who has sent his daughter, granddaughter and mother-in-law to Israeli hospitals for medical treatment? His name is Ismail Haniyeh and he is the head of Hamas. Actually, let me phrase that differently so you understand exactly who he is. He is not a man; he is a beast. His goal, dream and desire is to see Israeli streets pouring with Jewish blood. He is the mastermind behind the kidnappings and murders of the three beautiful boys we all prayed and cried for;  He is the one who kidnapped Gilad Shalit and held him prisoner for five years; He is the one who started the war this summer that killed 67 of my brothers (and yours too!) and sent millions screaming in panic; He is the mass murderer behind the suicide bombings that have killed close to 2,000 Jews and have injured – both physically and psychologically – over 50,000 others. In other words, he is the closest thing to Adolph Hitler and is the person responsible for more Jewish pain and suffering in the world today than anybody else.

One minute – there’s actually more to this story that makes it even worse. Ismail Haniyeh – yimach sh’mo – states over and over again that Israel does not exist. He refuses to recognize Israel and is sworn to its destruction. To him, there simply is no Israel – just a few Jews temporarily dancing around Jerusalem and Haifa. There is no country and certainly no legitimacy and this is what gives him the international right – supported by many members of the UN – to work day and night towards ethnically cleansing that area of all Jews. The rockets, the missiles, the bombs, the stabbings and the kidnappings are all acceptable since Israel does not exist in the first place!

Here are 2 quotes from Haniyeh:

Feb 12, 2012 – A speech given in Iran while standing next to Iranian president Mahmoud Ahmadinejad; “The gun is our only response to the Zionist regime. In time we have come to understand that we can obtain our goals only through fighting and armed resistance and no compromise should be made with the enemy.”

The bottom line is this, and if you haven’t figured it out by now, you are simply blind. The world is led by a bunch of hypocrites. They condemn Israel, yet use our technology to bring water to poor countries. They trash Israel at every opportunity possible, yet use our inventions in the field of medicine, telecommunications, computers and in saving time in traffic with WAZE. Israel has become an “ATM PIN CUSHION”, a devise into which you stick pins and hurt the machine yet – whenever you need – you use that same machine to give you as much cash as you need!

However, like most of our problems, I blame ourselves and not Ismail Haniyeh. He is laughing at Israel, which gladly accepts and treats his sick daughter. We are the problem – not him!

Here is what I would have said to him when he requested help from an Israeli hospital; “You are my enemy. You have dedicated your life to killing my sons and daughters and now you ask me to help yours? Because of you, we have buried thousands of beautiful Jews. Young mothers have become widows, little babies have become orphans and parents have buried children. No, we will not help your daughter or granddaughter and if because of that they die, then their blood is on YOUR head, not ours. We didn’t ask for this war but since you started, we will finish it. Do you seriously think that as you kidnap our children we would medically treat and help yours? Is there anyone else in the world that would even consider this? Oh, right – you expect Jews to be better and more moral than everyone else. This is actually the only thing we agree on! I WILL be better than you. My soldiers will kill more of my enemies than yours could ever dream of. My rockets will be better as well and so will my tanks and planes. The old shtetl, ghetto Jew who sat in fear of the goy is gone, and today, the proud young men and women of the IDF are a LOT better than you or your ISIS buddies will EVER be. And we are more moral as well, since we will do everything possible to protect the lives of those soldiers over the lives of your daughter and granddaughter and yes – even your mother-in-law. Those who, in the past, put your family first are the IMMORAL ones and while we wish your sick daughter no harm, she will not step foot into an Israeli hospital as long as her father is still breathing. I will compromise on one thing. After the elite IDF commandos send you to meet Allah, we will examine her on her way home from your funeral. Our fine, Jewish doctors will then write their recommendations as to what should be done and then ship her off to one of the many hospitals you built in Gaza for medical care.”

May this be the year that our Jewish leaders speak this way. Amen