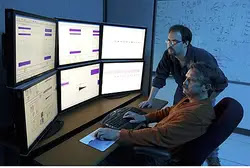 Hackers have reiterated the call for a mass cyber-attack on Israeli websites - dubbed OpIsrael - for April 7, according to Yediot Aharonot.

"On April 7, we urge our brothers and sisters to break, to destroy and take over websites and leak data - to eliminate Israel's cyberspace," the hackers threatened Sunday. "We will not stop until Palestine is freed."

Actual cyber-attacks have not been reported in the interim, despite concerns over cyber-security in the wake of failing peace talks. However, hackers have already taken to Twitter and other social media to brag lies about sites which were allegedly already hacked.

According to the report , the groups leading the movement include hackers from the Palestinian Authority (PA), Syria and Iran as well as India, Malaysia and Jordan.

The main attack targets outlined are financial organizations such as banks and credit card companies, academic institutions, and government offices.

The Arab branch of "Anonymous" revived the old threats last month. A similar attack took place last year on April 7; Israeli government web sites came under heavy attack on that day, but the hackers failed to bring down any Israeli sites, the Foreign Ministry said on April 7, 2013.