Have you heard of the 10 lost tribes of Israel??

Hundreds of Bnei Menashe from India Arriving in Israel 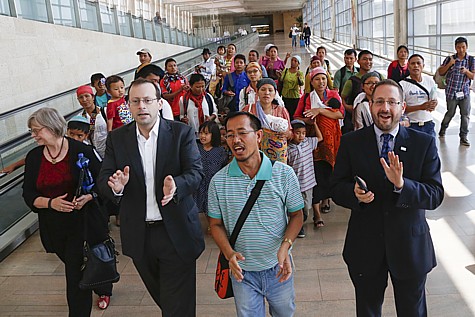 Ben Gurion Airport, Israel, June 19 – Forty-three members of the Lost Tribe of Bnei Menashe arrived yesterday in Israel. The new Olim (immigrants to Israel) hail from the northeastern Indian state of Manipur, and they bring the total number of Bnei Menashe who have made Aliya this month to 250. Thus far, since the start of the year, 410 Bnei Menashe have come here, the largest number that has ever been recorded. The immigrants were brought to the Jewish state by the Jerusalem-based Shavei Israel organization, which received permission from the Israeli government last October to bring 900 Bnei Menashe to Israel by 2015. The remaining 490 Bnei Menashe (out of the total of 900) will be brought to Israel by Shavei Israel by year’s end. “It is so moving to see the Lost Tribe of Bnei Menashe returning to Zion and rejoining the people of Israel,” said Shavei Israel Founder and Chairman Michael Freund.

“After 2,700 years, the Bnei Menashe are returning to our people and our land, and we won’t stop until all the remaining 7,000 community members still in India will be able to come here,” Freund added.

“This is a great day for me and my family, and for all of the Bnei Menashe,” said Bnei Menashe community chairman Yochanan Phaltual, who made Aliya this morning from India and was reunited with his father and siblings in Israel. “It is a dream come true, the dream of our forefathers, and we thank G-d that we have come home,” he added.

The Bnei Menashe are descendants of the tribe of Menashe (or Manasseh), one of the Ten Lost Tribes of Israel who were exiled by the Assyrian Empire after King Solomon’s death more than 2,700 years ago. In recent years, Shavei Israel has brought some 2,400 Bnei Menashe back home to Zion. Another 7,000 still remain in northeastern India, waiting for the day when they too will be able to return to Israel and the Jewish people.