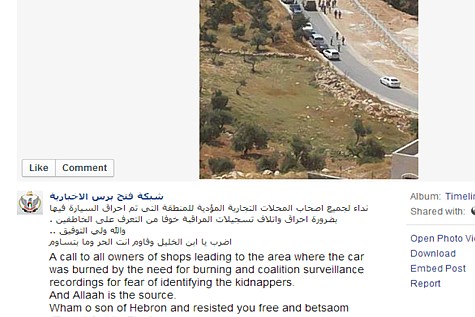 Fatah, the military wing of the Palestinian Authority (Mahmoud Abbas) has called on shopkeepers to destroy their CCTV camera footage to prevent the IDF from using it to help find the kidnapped children.

This is a directive, posted on the official Facebook page of the Palestinian Authority’s Fatah organization, which is under the direct command of PA President Abu Mazen. It instructs local shopkeepers to burn and destroy all evidence that might enable Israel to identify and track down the kidnappers and the boys.

Press Fatah Network News Appeal to all owners of shops leading to the area that had been burned car in which the need for the burning and destruction of records for fear of surveillance to identify the kidnappers. God Crown success .. Multiply the Son of Hebron and resisted You are free and Ptsawm

UPDATE: Reports now add that Fatah terrorists confiscated security cameras from Hebron residents to avoid their seizure by the IDF.