In 1922, the League of Nations confirmed the British Mandate of Palestine, territory taken from the Ottoman Empire following World War I. The Mandate charged Britain with securing the establishment of the Jewish national home, and safeguarding the civil and religious rights of all the inhabitants of Palestine. Just a few months later, Britain decided to lop off 77% of the land and use it to establish the Hashemite Kingdom of Transjordan (today called Jordan). In ensuing years, Jewish immigration to Palestine created much Arab resentment, and the British responded by placing strict limitations on Jewish immigration. This policy had lethal consequences for Jews fleeing Hitler's ovens. When the British continued to placate the Arabs, for example by restricting Jewish land purchases, a revolt was organized by Zionist groups. By 1948 this pressure had forced the British out of Palestine, clearing the way for an independent State of Israel. 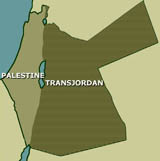