Ha-tikva sung at the Western Wall [kotel ] in Jerusalem] 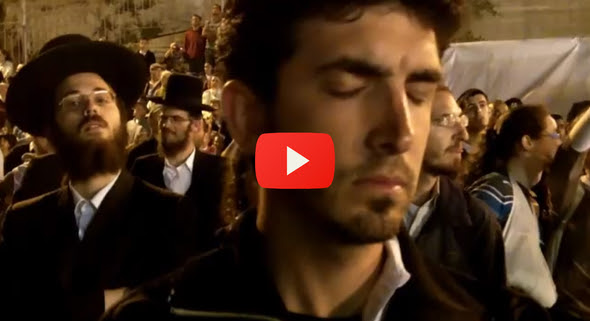 The words to Israel's national anthem were written in 1886 by Naphtali Herz Imber, an English poet originally from Bohemia. The melody was written by Samuel Cohen, an immigrant from Moldavia. Cohen actually based the melody on a musical theme found in Bedrich Smetana’s "Moldau."

As long as deep in the heart,
The soul of a Jew yearns,
And forward to the East
To Zion, an eye looks
Our hope will not be lost,
The hope of two thousand years,
To be a free nation in our land,
The land of Zion and Jerusalem.

Viewing the Hebrew characters below requires a current version of Internet Explorer, Opera or Mozilla browser.

The title of the national anthem, HATIKVA, means "The Hope." It was written by Naftali Herz Imber (1856-1909), who moved to Palestine in 1882 from Galicia. The melody was arranged by Samuel Cohen, an immigrant from Moldavia, from a musical theme in Smetana's "Moldau" that is partly based on a Scandinavian folk song.

Hatikva expresses the hope of the Jewish people, that they would someday return to the land of their forefathers as prophesied in the Hebrew Bible. The Jewish people were exiled from Israel in 70 C.E. by the Roman army led by Titus who destroyed the Temple in Jerusalem. During the two thousand years of exile, the Jewish people said special daily prayers for return to Israel while facing the East in the direction of Jerusalem. They celebrated the holidays according to Hebrew seasons and calendar. Zion is synonymous with Israel and Jerusalem.