To Family, Friends, and Colleagues:
Israel is at war.  It is an unusal war; Hamas, et al. fire rockets and Israel fights primarily with its air assets, though a ground operation appears to be in preparation.  Friends have been called up, and officially, 45,000 soldiers are being prepared for extended operations.  The leadership has been talking a great deal about a long operation--they are preparing the home front for something longer than a few days or two weeks as has been the norm during the past 10 years.
Outside of Israel, it may seem that the Hamas rockets are more nuisance than threat--kind of like mosquitoes.  Whereas suicide bombings rarely go off without casualties of some type, most of the rockets fired, thank G-d, fall in open fields or cause property damage more than human injury.  But the truth is that such rockets have casued death and grievous injury.  They are not harmless, and unlike a few years ago, their reach has spread beyond the immediate south of the country to include Netanya, Beit Shemesh and yes, Jerusalem.  We had an "up and down" siren last night around 10:30.  Is it real?  Where to go?  The nearest public bomb shelter is quite a walk--should one be outside to get there or is it better to remain inside?  If inside, where?  What room is safest? These are questions that people in Sderot, Beer Sheva and elsewhere have been dealing with for years.  When I had occassion to be in the south a few months ago, I saw the massive concrete sewer pipes that are used by residents for temporary cover when the air raid siren goes off suddenly.  They have about 15 seconds "to do something". Jerusalem, Tel Aviv, and Haifa do not have such elements--yet--but if Israel decides to leave Hamas and their missiles somewhat intact, then those big pipes might be finding their way to a new locations like our neighborhood.
Do the kids go to school?  This was a question which Education Ministry did not decide until 7 this morning.  They made an unusal ruling:  schools that have bomb shelters are open; those that don't are closed (and yes, our boys are home, so you can figure out where they go to school....).  Because rockets have hit schools and kindergartens in the south as recently as last week, the officials probably could not take responsibility of such a thing G-d forbid were to happen here.  Though statistically, it may seem one in a million, after the fact, who will take responsibility for a flattened classroom filled with kids?  Was a few hours of instruction worth the risk of life and limb?  So school is out--for how long, nobody knows.
And believe it or not, Israel is still sending fruit and gasoline to Gaza.  You read that right.  While missiles fly overhead, trucks loaded with fruit enter Gaza.  As the Gazans don't care to return the fruit crates, there is a shortage of the same in Israel proper...this is nothing new.  Israel supplies food, water, electricity, gasoline, power plant fuel and even new currency to Gaza.  I would like to have seen Adm. Nimitz sending Adm. Yamamoto some shiny new quarters during the Battle of Midway. As people like to say, "Only in Israel".
During the day, the radio is on all of the time.  Programming is continually interrupted by announcements of "Code Red" in various locations.  Israel can quickly identify projectiles and their apparent trajectories.  A parabola is still a parabola.  Many are shot down by the Iron Dome system--if they are determined to be on their way to population centers, but many continue their flights. $100,000 missile to shoot down a $100 rocket, but to save lives, that's the price.  People become paralyzed when they hear the sirens--and then drop everything and run to some reinforced room or bunker.  Picture punctuating your life every 15 minutes and then trying to get back to work.  I have read that all of the children in the south of Israel suffer from some type of post-traumatic stress disorder.
A few years ago, Revital and I made our way to Soroka Hospital in Beer Sheva.  A young mother and her very young son were driving when sirens went off.  They followed the rules, got out of the car and lay flat on the road.  After hearing the impact/explostion of a Grad missile, they got up.  Then the second missile hit and the boy, Orel, was badly injured in his head.  We went there to offer our support and encouragement after we had heard about a young boy with a head trauma.  Around the same time, the sitting defense minister, who came from Sderot, was home for a visit. One of his guards lost a limb in a separate rocket attack.
Please pray for peace for Israel and its residents.  The rockets are not a joke; they are a terror weapon designed to maim and kill as well as disrupt life.  Yes, we can be grateful that they don't have more sophisticated weaponry, but that which they have is dangerous nonetheless.  Below is a picture of a crater made by a recent Grad missile fired at Beer Sheva.  The hole looks like something from a Nazi V1 fired on London.
No country would tolerate a tenth of the missile fire that Israel has absorbed since the retreat from Gaza.  A few Pancho Villa rockets from Mexico would get the best of the US forces over the border to put an end to such attacks.  Hamas is a terror organization bent on killing Jews.  Whatever social services it may provide or political standing it claims is all secondary.  Let's hope that they will have no further capability to fire rockets on civilians. May G-d have mercy on the residents of Israel and the soldiers and may we see peace sooner rather than later.
Sincerely,
Alan 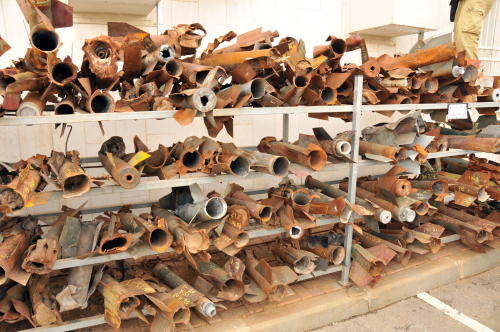 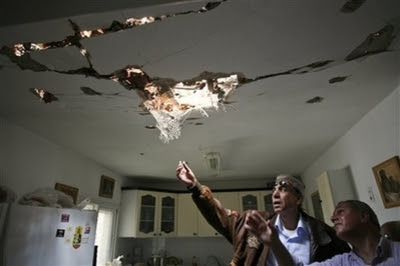