The blessings [and "curses"] of modern medicine

​You all may know that I think that a big leap forward  ["miracle"] of modern medicine is the development of vaccines.​
The same is true for the discovery of modern antibiotics ,
steroids[prednisone], furosemide [fusid ,Lasix],digoxin ,some antipsychotic drugs, the "new"sedatives in the group of benzodiazepines , metformin, insulin etc , all if used with good judgment and common sense.
Tens of other drugs are superfluous and often highly damaging.
In the group of vaccines , the older ones like tetanus, diphtheria, polio,[maybe pertussis  for the first year of life] have been have been an absolute blessing .
[ small-pox as well, [a  quite dangerous vaccination] when small pox was still around
and killed so may people]
Below I am sending you an article about hepatitis B vaccination which I don't advise and which all Israeli children are given already in the hospital after birth.
The same is true for vaccine against HPV, which is highly propagated in Israel.
I am very selective when I copy just one sentence from Wikipedia as I can't want to write for the moment here more about this subject [see past E-mails], I just decided to let you read what the Japanese Ministry of health thinks.

Since 2010, girls in Japan have been eligible to receive the cervical cancer vaccination for free.[86] In June 2013, the Japanese Ministry of Health, Labor and Welfare mandated that, before administering the vaccine, medical institutions must inform girls that the Ministry does not recommend it.[86] However, the vaccine is still available at no cost to Japanese girls who choose to accept the vaccination.[86] 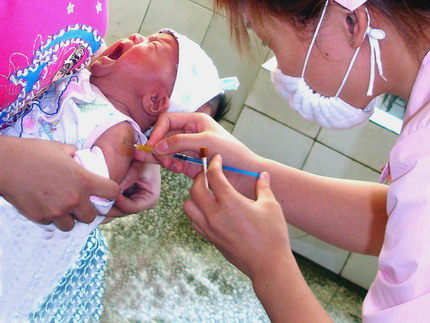 "According to Hippocratic tradition, the safety level of a preventive medicine must be very high, as it is aimed at protecting people against diseases that they may not contract." ~ Marc Girard, Autoimmune hazards of hepatitis B vaccine.

Startling new research published in the journal Apoptosis indicates that hepatitis B vaccine, which is designed to prevent Hepatitis B virus-induced damage to the liver, actually causes liver cell destruction.

In the study titled "Hepatitis B vaccine induces apoptotic death in Hepa1-6 cells," researchers set out to "...establish an in vitro model system amenable to mechanistic investigations of cytotoxicity induced by hepatitis B vaccine, and to investigate the mechanisms of vaccine-induced cell death."1

They found the hepatitis B vaccine induced a "loss of mitochondrial integrity, apoptosis induction, and cell death" in liver cells exposed to a low dose of adjuvanted hepatitis B vaccine. The adjuvant used was aluminum hydroxide, which is increasingly being identified as a contributing cause of autoimmune disease in immunized populations.

The discovery that the hepatitis B vaccine damages the liver (hepatotoxicity) confirms earlier findings (1999) that the vaccine increases the incidence of liver problems in U.S. children less than 6 years old by up to 294% versus unvaccinated controls.

Another study published in the journal Hepatogastroentology in 2002, observed that Hepatitis B vaccination was statistically associated with gastrointestinal reactions including: hepatitis, gastrointestinal disease and liver function test abnormalities in comparison to other vaccine control groups.

This, however, is only the tip of the iceberg...

In a revealing study published in June 2011 in the journal Molecular Biology Reports, researchers demonstrated that hepatitis B vaccine alters the expression of 144 genes in the mouse liver within 1 day of vaccination, 7 of which are related to inflammation and metabolism. The authors noted:

"Pharmaceutical companies usually perform safety testing of vaccines, but all requirements of the World Health Organization and drug pharmacopoeias depend on general toxicity testing, and the gene expression study of hepatitis B vaccine is not done routinely to test vaccine quality."

Could the gene-expression altering affects of hepatitis B vaccine be one reason why there are over 60 serious detrimental health effects associated with the vaccine as documented in the peer-reviewed and published biomedical literature, including sudden infant death?

Other potential mechanisms of action behind hepatitis B vaccine's dangerous side effects, are as follows...

Why Are They Vaccinating Infants For Hepatitis B Virus?

The real danger here is that universal vaccination against Hepatitis B virus may be causing far more harm than good. It is actually our youngest -- infants -- who are most at risk of being irreparably harmed, as the CDC's vaccine schedule requires Hepatitis B vaccination at birth, 1-2 months, and then again at 3-6 months of age.