Amazing Nature.........and how careful we should be 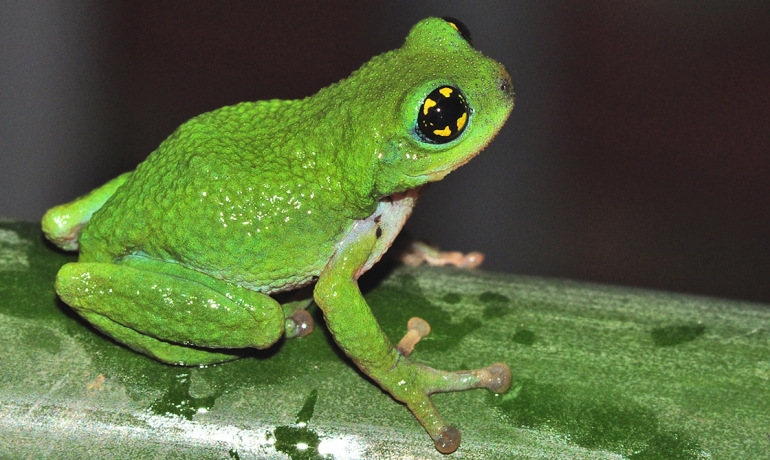 An endangered frog, considered extinct for more than 100 years, reproduces in an extremely unusual way.

The male white spotted bush frog (Raorchestes chalazodes) crawls inside bamboo and then calls out to attract mates. Female frogs drawn by the calls follow suit, and more than one may mate with the male to lay up to eight eggs per clutch inside the bamboo.

The male stays in the bamboo to take care of the eggs, which develop directly into froglets.

Watch the frog squeeze into the bamboo

The frogs were rediscovered recently in the wet evergreen forests of the Kalakad Mundanthurai Tiger Reserve in India’s Western Ghats. The species is currently only one of two species known to adopt this unusual reproductive strategy.

Despite its small size of up to 25 mm (1 inch) in length, the adult frog enters the bamboo with considerable resistance, as the narrow openings are often less than 5 to 10 mm long and 3 to 4 mm wide.

The adult males actively search for openings in bamboo and possibly defend their territories. They leave the bamboo for a few hours in the evening to feed and return to look after the eggs.

“This is a significant discovery in two ways. First, it reiterates that natural history observations, often ignored, are fundamental for understanding evolutionary ecology,” says David Bickford, who co-led the study and is an assistant professor from the biological sciences department at the National University of Singapore.

“Second, it sets a theoretical foundation to ask several interesting questions about the diversity of reproductive modes and the evolutionary pathways behind such amazing amphibian behaviors.”

Save the bamboo. Save the frogs

PhD student K S Seshadri, the lead author of the paper published in the Journal of the Linnean Society, points out that amphibians are among the most threatened creatures on Earth but very little is known about them.

“There are several questions about evolutionary ecology that could be answered by studying this fascinating group of frogs. For example, what transpires inside the bamboo internodes is still a mystery.”

The study is timely as the currently critically endangered R. chalazodes only breeds in bamboo. The plant’s unregulated overharvesting for paper and pulp may destroy breeding habitats and negatively impact the longterm viability of the frog.

The investigators call for more research to be conducted on these rare animals, particularly work that looks into developing frog-friendly bamboo harvesting techniques in order to conserve them.