The rise of Islam...........excellent summary with lot of not-well known facts.

Mohammed reacted with anger when the Jews refused to recognize him as a prophet. 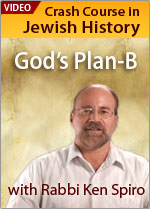 In the previous class, we described the Jewish impact on intellectual Rome prior to the advent of Christianity. Similarly, Jews living on the Arabian Peninsula impacted on their Arab neighbors.

During the days of Jewish clashes with the Roman Empire, Jews fled to areas outside the control of Rome and founded many towns and villages in Arabia. One very famous town, almost certainly founded by Jews, was Yathrib. Today Yathrib is better known as Medina and is considered Islam's second holiest city (after Mecca).

As in Rome, the local Jews attracted significant numbers of converts to their way of life and many more admirers. M. Hirsch Goldberg, in the Jewish Connection, sums up the story before the early 7th century:

In Arabia, whole tribes converted to Judaism, including two kinds of the Himyarites. French Bible critic Ernest Renan remarked that "only a hair's breadth prevented all Arabia from becoming Jewish."1

One of those impressed by the Jews' uncompromising devotion to monotheism was a young trader named Mohammed ibn Abdallah. Although his travels had exposed him to Christianity and he was clearly influenced by it, he found aspects of it troublesome - in particular, the doctrine of the Trinity did not seem strictly monotheistic in his eyes. He is recorded as having said:

However, there is no doubt that in the early stages of his spiritual awakening, Mohammed came to be greatly impressed by the Jews. Writes S.D. Goiten in Jews and Arabs:

The intrinsic values of the belief in one God, the creator of the world, the God of justice and mercy, before whom everyone high and low bears personal responsibility, came to Mohammad - as he never ceased to emphasize - from Israel.3

Mohammad clearly had some knowledge of the Torah as later he would quote Moses (though not always accurately) more than 100 times in the Koran, the record of his teachings which became the holy book of his newfound religion. Of the 25 prophets listed in the Koran, 19 are from the Hebrew Bible, and many ritual and civil laws of Islam parallel Judaism - for example, circumcision and the prohibition against eating pork.

Mohammed believed that the Arabs were the other children of Abraham - through the line of his son Ishmael by the Egyptian maidservant Hagar - and that they had forgotten the teachings of monotheism they had inherited ages ago. He saw his mission as bringing them back. Paul Johnson, in his A History of the Jews, explains:

What he [Mohammed] seems to have wished to do was to destroy the polytheistic paganism of the oasis culture by giving the Arabs Jewish ethical monotheism in a language they could understand and in terms adapted to their ways. He accepted the Jewish God and their prophets, the idea of fixed law embodied in scripture - the Koran being an Arabic substitute for the Bible - and the addition of an oral law applied in religious courts.4

There is no argument that the Arab world into which Mohammed was born was badly in need of moral values and social reform. The Mecca of his day was a central place of pagan worship. The Arab tribesmen of the region worshipped a pantheon of gods there, including Al-Lat, the moon goddess, Al-Uzza, the fertility goddess, and Manat, the goddess of fate, all three of whom were daughters of the chief deity, known as Al-Ilah (Allah) or "the God."5

The Kaaba, the shrine enclosing the famous black meteorite which was worshipped in Mecca before Mohammed's time, was also a site for an altar where blood sacrifices were offered to these and other gods. 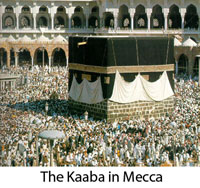 The morality of the neighboring tribesmen could, charitably, be described as chaotic. Huston Smith, in his classic The Religions of Man, goes so far as to call the Arab society before the advent of Mohammed "barbaric."

Mohammed was repelled by the cruel and crude reality around him. In the year 610, at the age of 40, he escaped to a desert cave where, according to Muslim tradition, he experienced a series of mystical visions, including revelations from the Angel Gabriel. He returned from the desert imbued with a spiritual mission to transform the pagan society around him.

Preaching an end to licentiousness and need for peace, justice and social responsibility, Muhammad advocated improving the lot of slaves, orphans, women and the poor, and replacing tribal loyalties with the fellowship of a new monotheistic faith - which he called Islam, meaning "surrender to God." (One who submits is a Muslim.) Islam, according to Mohammed, was built on five pillars:

Initially, Mohammad attracted very few followers. After three years, he had barely 40 converts. But, imbued with a passion that has been the hallmark of the great visionaries of the world, Mohammed would not give up. And, little by little, he built a steady following of committed loyalists.

The more followers he attracted, the more attention, and with it, the more hostility. The merchants of Mecca, whose livelihood depended on the pagan sites and rites of the city, weren't going to be easily displaced. A murder plot was hatched, but Mohammed escaped in the nick of time.

While persecution of the Muslims was mounting in Mecca, the city of Yithrab was experiencing problems of internal strife and a delegation decided that the fiery preacher from Mecca would be the man to bring order to chaos. After winning the pledge of city representatives to worship only Allah, Mohammed agreed to migrate. His journey to Yithrab in the year 622 CE, the year 1 of the Islamic calendar, has been immortalized as the Hegira.

Thus his life was saved and a new horizon opened for his teachings. It was in Yithrab - heretofore to be known as Medina, "the city of the prophet" - that Islam took hold in a major way.

Once he had made Medina his stronghold, Mohammed mobilized an army of 10,000 men and, in 630 CE, moved against Mecca, meaning to purify the Kaaba and turn it into a center of worship of the one God, Allah. His success is legendary. Two years later when he died, all of Arabia was under Muslim control.

Mohammed and the Jews

The one problem Mohammed had faced in Medina - and elsewhere - were the Jews, who were not prepared to accept his Arab version of Judaism. In the same way they had previously rejected Christianity, so too did they rejected Islam.

It must be pointed out, however, that the Jews had a lot less problems with Islam than they did with Christianity. Islam was purely monotheistic, whereas Christianity incorporated a lot of pagan mythology into itself. Islam did not claim that Mohammad was "god" or "son of God" or that God came in three parts. Islam followed many Jewish laws and customs, unlike Christianity which disavowed the law of the Torah in favor of faith in Jesus.

The most important point of agreement was that Abraham was the father of both the Jews (through his son Isaac) and the Arabs (through his son Ishmael). This made the two peoples half-brothers. But the chief disagreement was whether Mohammed was indeed the last of the prophets to be sent by God and that his word was the final revelation. The Jews found the idea unthinkable since for them prophecy had ended long before and the words of the Torah could never be superseded.

Their rejection was painful to Mohammed who reacted with hostility toward the Jews and took great pains to pointedly separate Islam from its Jewish roots. The holiest day of the week was changed to Friday; direction of prayers was changed from Jerusalem to Mecca; most of the Jewish dietary laws were excised from Islam with the exception of the slaughter rituals, prohibition on pork and consumption of blood.

Further, Mohammad maintained that the Jews had distorted their own Bible: Abraham did not attempt to sacrifice Isaac to God at Mount Moriah in Jerusalem; rather, Abraham took Ishmael to Mecca, where he offered to sacrifice him to Allah on the Black Stone of Kaaba.

If Jews had previously rebuffed Mohammed's claims to prophecy, they now openly sneered at what they considered a complete fabrication. This only made things worse. Mohammed's anger and curses against the Jews are recorded in the Koran:

Mohammed's anger toward the Jews was not just rhetoric. The period from 622 CE until Mohammed's death in 632 CE was punctuated by periods of intense anti-Jewish violence, as he systematically expelled, plundered and even slaughtered the Jews of Nadir, Khaybar and Banu Qurayza who lived in and around Mecca. Mohammed's victories against the Jews are discussed in great length in the Koran.8

After Mohammed's death some of his followers would interpret his actions and statements as license to purge the world of the Jews. Other Muslims would concentrate more on the commonality of heritage and belief that Mohammed had also emphasized, and they would treat the Jews better.9

At the time of Mohammed's death in 632 CE, Arabia was united and poised for Jihad, the "holy war" or "holy struggle" to bring the world to Allah. Shortly, it moved with a fearsome power against the Byzantine and Persian empires.

From its earliest foundation, Jihad was an important principle of Islam. While most people think the term Jihad means holy war, the actual meaning is "struggle" and can be used to refer to both the internal struggle between good and evil and the external struggle between the Muslim world (dhar al Islam) and the non-Muslim world which is called the "world of war" (dhar al hare). The earliest mention of the term Jihad - as used in 7th century Islamic law code called Sharia - refers to the latter, the external struggle against the non-Islamic world.10

What did Jihad against the Byzantine Empire mean for the Jews? Answers Rabbi Berel Wein in Echoes of Glory:

Most Jewish historians (until the recent revisionist-historians) are convinced that the Byzantine Church would have attempted to eradicate Judaism totally if the Church itself had not been defeated and its plan for hegemony in Asia Minor and the Mediterranean basin thwarted by the rising tide of Islam. Thus, the coming of Islam may be seen as a providential occurrence that allowed the Jews to slip between the cracks Islam made in Byzantine Church persecution. However, as is the case in all historic "gifts" in Jewish history, the rise of Islam would prove to be only a mixed blessing for Israel.11

In the Islamic world, Jews were classified as ahl al-dhimma ordhimmi, "protected people," and were allowed to live without being forced to convert. But a whole code of law applied to them, most of it designed to set them apart, humiliate them and emphasize their inferior status. For example, a Jew could never have his head higher than a Muslim. So if a Jew was walking along, and a Muslim passed by, the Jew had to step into the gutter in deference to the Muslim's superior status.

A Jew could never testify against a Muslim in court (which basically meant there was no justice for Jews). A Jew could not have a house of worship that was higher than a mosque, which is why (for example) the Four Sephardic Synagogues in the Old City of Jerusalem are subterranean. It should be noted that throughout history some of these laws were not uniformly enforced, and there were periods of time when Jews living in Muslim countries were openly persecuted and others when they were treated very well.

A case in point of the latter is the Jews of Babylon, who flourished under Muslim domination.